A total of 350 participants from 44 countries attended the 14th International SPECTRALIS® Symposium (ISS) on November 25th and 26th at the Garden Palace Liechtenstein in Vienna, Austria. 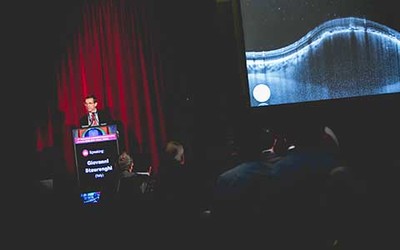 The goal of the ISS is to present and discuss cutting-edge research and clinical applications related to diagnostic imaging tools for retina and glaucoma. This year’s program, however, started with an “atypical” innovations session devoted to the anterior segment. Prof. Oliver Findl, who also acted as course director, introduced a study about the use of swept-source OCT as a novel technology to image the anterior segment using an imaging platform currently under development at Heidelberg Engineering. This cataract and refractive imaging platform aims at increasing the accuracy of biometry and power calculations.

Also as part as the initial innovations session, Prof. Felipe Medeiros talked about the nGoggle, a portable brain-computer interface being developed as a potential new tool to monitor visual function loss routinely and objectively. Asst. Prof. Alex Huang, in turn, pointed to the impact of body positioning on ophthalmic imaging results.

The subsequent sessions were devoted to clinical retina as well as to therapy recommendations based on imaging results for diabetic macular edema. Highlighting the diversity of the international audience in attendance, one of the retina speakers was a Chilean doctor, Jorge Andrés Orellana Ríos, who presented one of the many freely-submitted clinical papers. He spoke on macular telangiectasia type 1 and explained the pathology’s connection to Theodor Leber (1840-1917), who was a researcher in Vienna and later became Head of the Department of Ophthalmology at Heidelberg University. 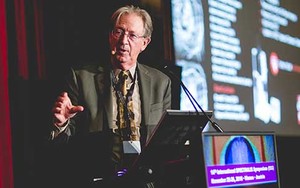 The OCT angiography session attracted a great deal of attention and included presentations by internationally-acclaimed experts such as Prof. Giovanni Staurenghi, Prof. Frank G. Holz and Prof. Gabriel Coscas. They reported on the latest developments related to the clinical use of OCT angiography and its application in disease detection and treatment response monitoring.

At the end of both days the ISS delegates were able to test their knowledge and win a prize in two interactive quizzes: The “Frank Holz Retina Battle” and the “Christian Mardin Glaucoma Battle”. The winner of the retina battle was a Slovenian doctor, whereas the glaucoma battle prize went to a Vienna-based, Austrian participant.

The ISS also included an evening at the renowned Spanish Riding School in Hofburg palace, a magnificent baroque building built in 1735 where Heidelberg Engineering set up a traditional outdoor Christmas market exclusively for ISS guests.

Video recordings of the presentations given at the International SPECTRALIS Symposium 2016 are available here:

Recorded Lectures of the ISS 2016

Impressions of the International SPECTRALIS Symposium 2016:

Please save the date for the 15th International SPECTRALIS Symposium, taking place in Boston, MA, USA, on October 13th and 14th, 2017. Details about the ISS 2017 will be made available on the ISS website.

Back to the overview

Cookies are used on this website to help Heidelberg Engineering achieve an optimum design of the website and to provide better service. By using this site, you agree to their use. Read more.