Not from Caribbean Netherlands?

Choose a different country or region to view content that is suited to your locality.

Not from Caribbean Netherlands?

Choose a different country or region to view content that is suited to your locality.

DOG 2015 highlights: German preview of Cataract and Refractive Imaging Platform and the latest on OCT angiography

Heidelberg Engineering attended the congress of the German Ophthalmologists’ Society (DOG) in Berlin from October 1-4, 2015. 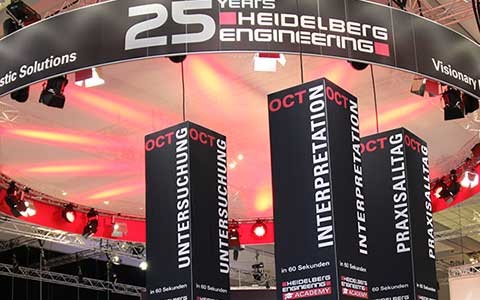 The overarching motto of this year’s event was basic research and cross-disciplinary cooperation. That was reflected in an outstanding program schedule on the latest ophthalmological themes that attracted almost 3,000 participants.

At the booth in the industry exhibition area, Heidelberg Engineering’s representatives demonstrated the latest SPECTRALIS® modules such as the OCT2 Module or the Glaucoma Module Premium Edition. They also discussed important topics such as the use of practice marketing materials and the new HEYEX PACS*, the next generation Heidelberg Eye Explorer platform which provides centralized management of diagnostic images in ophthalmology.

However, the innovation that received most attention at the booth was the new Cataract and Refractive Imaging Platform*, which was presented in Germany for the first time following its premiere at the ESCRS in September. It is a platform that integrates biometry for IOL calculation, corneal topography and tomography, as well as anterior segment biometry based on high-resolution swept-source OCT images; all in one modular, upgradeable system.

In addition to exhibiting at the congress, Heidelberg Engineering also hosted a fully booked lunch symposium event on OCT angiography and supported a series of short presentations at the Novartis booth named “Meet the experts”.

The lunch symposium was titled “Update on OCT Angiography” and was structured as follows:

The “Meet the experts” sessions at the Novartis booth covered mainly the therapeutic management of patients with the support of multimodal imaging tools and the diagnostic possibilities that OCT angiography may open up for certain pathologies. The sessions were presented by: Dr. Tim U. Krohne, Dr. Monika Fleckenstein and again Prof. Frank G. Holz.

From a historic point of view, various celebrations took place on October 3, 2015 to commemorate the 25th anniversary of the German reunification in Berlin. Coincidentally, Heidelberg Engineering was also celebrating its 25 year anniversary at the DOG congress.

* Under development and not for sale yet.


See the video for some impressions from the DOG 2015:

Back to the overview